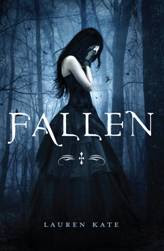 WoW is a meme hosted by Jill at Breaking The Spine.

Dangerously exciting and darkly romantic, Fallen is a page turning thriller and the ultimate love story.


I have no idea what exactly the book is about. Vampires? Angels? Werewolves? Demons? The blurb is so vague...in a way it makes me want it even more. It's release date is December 7.

Email ThisBlogThis!Share to TwitterShare to FacebookShare to Pinterest
Labels: Fallen, Waiting on Wednesdays