Jen Nadol is the debut author of The Mark, which came out the 19th of this month. (But go here for your chance to win.) And don't forget to check out my review of The Mark. She took the time to answer some questions for us!

When did you decide that you wanted to be an author? I think I've always flirted with the idea of being a writer, but in a dream-job king of way. I always loved to read, wrote on & off in high school, and majored in English in college, but when it came time to get a "real" job, I ended up in the business world (which was a TERRIBLE fit for me). I'm not sure I ever really believed I *could* be a writer. I'm so glad I finally tried.

Where did you get the idea for The Mark?
There was no real triggering event or lighting-bolt moment, I was just tossing around ideas, trying to come up with something interesting to write about and there it was: what if you knew it was someone's day to die?

I could see lots of possibilities, even some of the scenes that would play out, so I ran with it.

What's your most effective way to get through writers block?
Bulldozing. Just get words on paper. Even if they stink. Even if I'm not sure if what I'm writing is the direction I want the story to go. I can always edit or even delete later, but if I've written nothing, I have nothing to work with.

Would you say that you and your main character, Cassie, are alike?
A couple of people have actually asked if I have the kind of ability Cassie does...which I don't. Thankfully. Our circumstances, family situations, etc are very different, but The Mark is a fairly introspective novel. I spent a lot of time inside Cassie's head writing it and, as a result, I think she thinks a lot like me. Does a lot of the things that - right or wrong - I would probably do in the same situation. 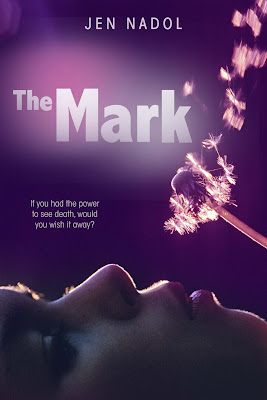 What are a few of your personal favorite books?
Thank you for making it a few, instead of just "a favorite"! I'm sure I'll be missing a hundred I love, but...The Secret History by Donna Tartt, The Dark Fields by Alan Glynn, almost any early Stephen King, The Hunger Games, Life As We Knew It, Wake by Lisa McMann, White Oleander, City of Dreams by Beverly Swerling, The Other Boleyn Girl.

Why YA? And do you plan to branch out to adult?
When I wrote The Mark, I didn't even realize it was YA. I'd never read in the genre so it never occurred to me until an agent I'd submitted to pointed it out. It was so obvious after that - of course it was YA!

I can't imagine branching out to adult fiction anytime in the near future.

I have a bunch of other ideas ready to be written and they're all YA. It's the voice that feels most natural and the stories that are most interesting to me. And, PS, YA books are ALL I read now!

Anything else you'd care to add?
Thanks so much for having me and featuring The Mark!

Thanks again to Jen Nadol for that great interview!