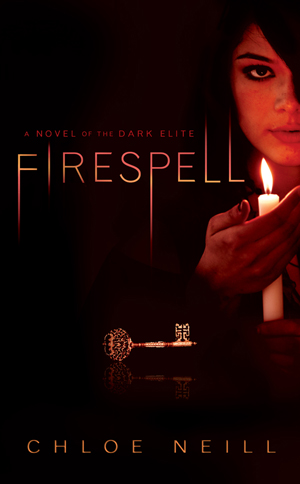 Author: Chloe Neill
Release Date: January 5, 2010
Pages: 246 (Paperback)
Publisher: Signet
Most Appropriate For Ages: 12+
Where I Got It: Won

As the new girl at the elite St. Sophia’s boarding school, Lily Parker thinks her classmates are the most monstrous things she’ll have to face…

When Lily’s guardians decided to send her away to a fancy boarding school in Chicago, she was shocked. So was St. Sophia’s. Lily’s ultra-rich brat pack classmates think Lily should be the punchline to every joke, and on top of that, she’s hearing strange noises and seeing bizarre things in the shadows of the creepy building.

The only thing keeping her sane is her roommate, Scout, but even Scout’s a little weird—she keeps disappearing late at night and won’t tell Lily where she’s been. But when a prank leaves Lily trapped in the catacombs beneath the school, Lily finds Scout running from a real monster.

Firespell could possibly be the start to an exciting new series, but by itself it wasn't a very strong read for me.

The characters were definitely there. Lily's an easily likable protagonist, and her best friend Scout was a great character. Their Gilmore Girls-eque banter was one of my favorite parts of the book, by far.

My biggest problem with Firespell was the snail-like pace. It seemed like nothing that interesting happened until the last 30 pages, and then it was too rushed. I guess it felt too much like a huge setup more than it should've. Also, the idea wasn't all that imaginative or original. I hadn't read the exact story before, but it sometimes felt like I had, y'know?

Firespell was a short read that wasn't by any means bad, and I think the sequel has potential to be a pretty awesome read. But, overall, I've read better.

Book Report:
Plot: Slow and occasionally unoriginal.
Characters: Fun and easy to like.
Writing: Pretty good. Lily's voice was very authentic.
Ending: Kind of rushed, but OK.
Kid friendly? Very. I think there's only one or two swears, and that's it.
Should I read it? If you're a fan of the genre, give it a go.
Overall: