DNF: reader code for "did not finish".

I don't really review books that I didn't finish, but I figured I'd share a few of those that I didn't and why they weren't for me. Cause who knows? Maybe you'll enjoy the elements I disliked.

Where I got it: From Galley Grab for review
How far I got into it: 130 pages
Recommended to: Fans of very romantic dystopias and paranormal.

Vi knows the Rule: Girls don't walk with boys, and they never even thinkabout kissing them. But no one makes Vi want to break the Rules more than Zenn...and since the Thinkers have chosen him as Vi's future match, how much trouble can one kiss cause? The Thinkers may have brainwashed the rest of the population, but Vi is determined to think for herself.

But the Thinkers are unusually persuasive, and they're set on convincing Vi to become one of them...starting by brainwashing Zenn. Vi can't leave Zenn in the Thinkers' hands, but she's wary of joining the rebellion, especially since that means teaming up with Jag. Jag is egotistical, charismatic, and dangerous--everything Zenn's not. Vi can't quite trust Jag and can't quite resist him, but she also can't give up on Zenn.

This is a game of control or be controlled. And Vi has no choice but to play.

I went into this one thinking I would love it, because it sounded straight up my alley, and the main character Vi sounded pretty rebellious. Yay. Unfortunately, things went downhill from there for me. The insta-love was some of the most instant that I've read, and if you've read my blog before then you know how much that bugs me. Combine that with some weird plot-holes and over-dramatic and just plain weird characters, and this was just not the book for me. But I've heard it gets better, so who knows?

The Faerie Ring by Kiki Hamilton

Where I got it: For review from publisher
How far I got into it: 150 pages
Who I recommend it to: Readers that aren't as weird about vague-ness as I am and don't mind a slow start.

Debut novelist Kiki Hamilton takes readers from the gritty slums and glittering ballrooms of Victorian London to the beguiling but menacing Otherworld of the Fey in this spellbinding tale of romance, suspense, and danger.

The year is 1871, and Tiki has been making a home for herself and her family of orphans in a deserted hideaway adjoining Charing Cross Station in central London. Their only means of survival is by picking pockets. One December night, Tiki steals a ring, and sets off a chain of events that could lead to all-out war with the Fey. For the ring belongs to Queen Victoria, and it binds the rulers of England and the realm of Faerie to peace. With the ring missing, a rebel group of faeries hopes to break the treaty with dark magic and blood—Tiki’s blood.

Unbeknownst to Tiki, she is being watched—and protected—by Rieker, a fellow thief who suspects she is involved in the disappearance of the ring. Rieker has secrets of his own, and Tiki is not all that she appears to be. Her very existence haunts Prince Leopold, the Queen’s son, who is driven to know more about the mysterious mark that encircles her wrist.

Prince, pauper, and thief—all must work together to secure the treaty…

I had such high hopes for this one. Everyone seemed to love it, so I had to love it too, right? Well, wrong. I really hate it when people are vague, and the first 150 pages of The Faerie Ring were just that: vague. Also slow. I didn't really connect to any of the characters (I really disliked Tiki, to be honest), so I decided that this one was just not for me. Again, though, I've heard that this one gets better. 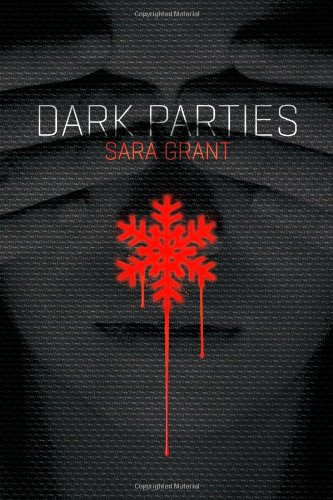 Dark Parties by Sara Grant
Where I got it: For review from publicist
How far I got into it: About 150
Who I recommend it to: Fans of most dystopias

Sixteen-year-old Neva has been trapped since birth. She was born and raised under the Protectosphere, in an isolated nation ruled by fear, lies, and xenophobia. A shield "protects" them from the outside world, but also locks the citizens inside. But there's nothing left on the outside, ever since the world collapsed from violent warfare. Or so the government says...
Neva and her best friend Sanna believe the government is lying and stage a "dark party" to recruit members for their underground rebellion. But as Neva begins to uncover the truth, she realizes she must question everything she's ever known, including the people she loves the most.

Another one that started strong but got worse. Dark Parties starts with a bang but then the main character crushes on her best friend's boyfriend. Who she's never even talked to. Um, no. I will not stand for this. I also just didn't connect to this story like I wanted to, so I couldn't finish this one.
So if these books still sound good to you, give them a try, but personally I wouldn't recommend them.