Judging A Book By Its Cover: From Bad To Cursed

The cover we're judging this time is... 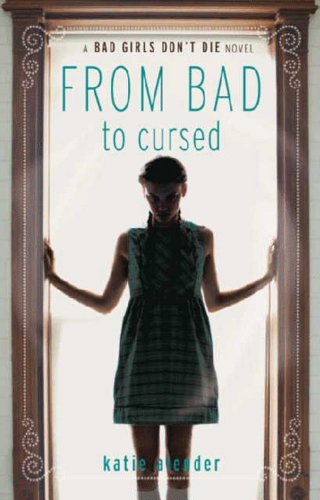 I love the cover for this novel's predecessor, Bad Girls Don't Die and I have to say that I quite like this one, too. The girl's pose is a little awkward, but her glare is great. Also, I love the way the light's shining in. So yes, I like the image a lot. I don't really love the color of the font. It just doesn't seem to tie into the image at all. The swirlies (yes it's a word) around the door frame are a very nice touch, though. All in all a good cover but not quite a great cover.
Now, let's learn what the first book in this series (Bad Girls Don't Die) is about:

When Alexis's little sister Kasey becomes obsessed with an antique doll, Alexis thinks nothing of it. Kasey is a weird kid. Period. Alexis is considered weird, too, by the kids in her high school, by her parents, even by her own Goth friends. Things get weirder, though, when the old house they live in starts changing. Doors open and close by themselves; water boils on the unlit stove; and an unplugged air conditioner turns the house cold enough to see their breath in. Kasey is changing, too. Her blue eyes go green and she speaks in old-fashioned language, then forgets chunks of time.

Most disturbing of all is the dangerous new chip on Kasey's shoulder. The formerly gentle, doll-loving child is gone, and the new Kasey is angry. Alexis is the only one who can stop her sister — but what if that green-eyed girl isn't even Kasey anymore?

Email ThisBlogThis!Share to TwitterShare to FacebookShare to Pinterest
Labels: From Bad To Cursed, Judging A Book By Its Cover