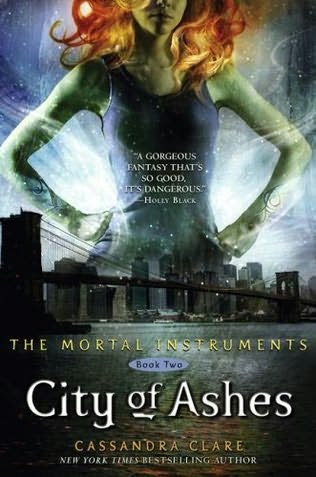 SPOILERS FOR PEOPLE WHO HAVEN'T READ CITY OF BONES

Clary Fray just wishes that her life would go back to normal. But what's normal when you're a demon-slaying Shadowhunter, your mother is in a magically induced coma, and you can suddenly see Downworlders like werewolves, vampires, and faeries? If Clary left the world of the Shadowhunters behind, it would mean more time with her best friend, Simon, who's becoming more than a friend. But the Shadowhunting world isn't ready to let her go -- especially her handsome, infuriating, newfound brother, Jace. And Clary's only chance to help her mother is to track down rogue Shadowhunter Valentine, who is probably insane, certainly evil -- and also her father.

To complicate matters, someone in New York City is murdering Downworlder children. Is Valentine behind the killings -- and if he is, what is he trying to do? When the second of the Mortal Instruments, the Soul-Sword, is stolen, the terrifying Inquisitor arrives to investigate and zooms right in on Jace. How can Clary stop Valentine if Jace is willing to betray everything he believes in to help their father?

It's official, I love this series.

It's an extremely original plot, with unexpected twists constantly being thrown your way. It's definitely something that's hard to put down. I love/hate the forbidden romance with Jace and Clary. But there were, literally, times where I yelled at the book.

The characters are unpredictable, lovable, and at times extremely frustrating. Unlike some characters, their not level-headed and put together, and at times it makes them seem easier to relate to and real.

The writing is unreal. The descriptions and emotions in this book couldn't be possible without Cassandra Clare's amazing writing. It's one of the main things that makes this book great.

It was missing a little bit of City of Bone's mystery, but was still great. I can't wait until I have a chance to get started on City of Glass, and will be very sad to see the enthralling series end.