*~CONTAINS SPOILERS FOR THE CRAZY PEOPLE WHO HAVE NOT READ THE HUNGER GAMES. DOES NOT CONTAIN SPOILERS FOR CATCHING FIRE~* 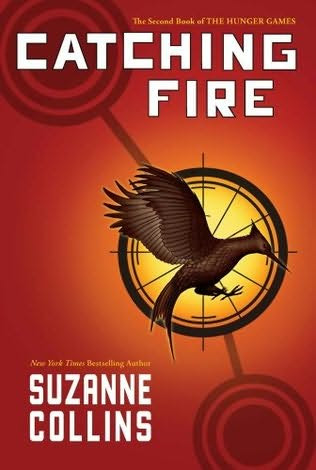 
Against all odds, Katniss Everdeen won the annual Hunger Games with fellow district tribute Peeta Mellark. But it was a victory won by defiance of the Capitol and their harsh rules. Katniss and Peeta should be enjoying their freedom. After all, they won for themselves and their families a life of safety and plenty of food. But there are rumors of rebellion among the subjects, and Katniss and Peeta, to their horror, are the faces of that rebellion. The Capitol is angry, and they want revenge.

Wow. I just finished this book moments ago, and am speechless and will most likely remain this way for some time. I know that people who have read The Hunger Games do not need me to tell them to pick this book up, but I feel like I need to contribute my thought and feelings about this book. Maybe for me, but I need to speak nonetheless. So:

To Whom It May Concern,

...Wow. When I started this book it didn't seem like it could live up to the high expectations that I had set for it after reading countless rave reviews on it. It seemed like I would be disappointed. I was wrong. DEAD WRONG. It was amazing. The ridiculously original, suspenseful, and overall fantastic plot that Suzanne Collins created did The Hunger Games more than justice. The gut-wrenching twists and turns left me gasping and hyperventilating.

Of course, Catching Fire wouldn't have been nearly the book it was without it's fantastic cast of characters. Katniss is the same tough-as-nails heroine with feelings AND extreme doses of bravery. How often do you find that in YA fiction these days? No very often, my friends. I didn't know I could love Peeta any more than after finishing The Hunger Games, but Catching Fire, again, proved me wrong. His unconditional love and care for Katniss isn't the only thing to love him for; he's also ridiculously brave and provides those few chuckles that even an action-packed dystopic book craves. Gale? Oh, that Gale. I don't care for him much. He's...whiny, almost. I'm definitely Team Peeta. Haymitch is great, too. Although hate-able, at the same time.

The writing in Catching Fire was great, as expected by Suzanne Collins. She was a little more descriptive in Catching Fire than in The Hunger Games, and for that I was grateful; it helped me imagine the characters more vividly.

The ending left me gaping at the book, expecting more words to jump out on cue. They didn't. There was a huge cliffhanger and I'm already expecting the next book to appear in a recurring dream. After I was finished, I closed the book and smelled it. I don't know why, maybe to savor every possible bit of it, but I did. Overall, in case you couldn't tell this was a wonderful sequel to The Hunger Games that leaves you begging for more. I probably would've devoured it in 1 day had it not come on the day where we had company, followed by a crazy-busy week. But, I still LOVED it.

Now if you'll excuse me, I'm off to discuss it on Shelfari since m friends are cheap and waiting for me to loan them my copy.

Was it better than The Hunger Games? GO. AWAY.