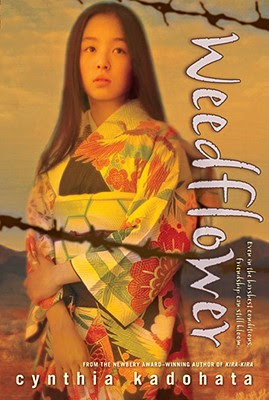 Twelve-year-old Sumiko feels her life has been made up of two parts: before Pearl Harbor and after it. The good part and the bad part. Raised on a flower farm in California, Sumiko is used to being the only Japanese girl in her class. Even when the other kids tease her, she always has had her flowers and family to go home to. That all changes after the horrific events of Pearl Harbor. Other Americans start to suspect that all Japanese people are spies for the emperor, even if, like Sumiko, they were born in the United States! As suspicions grow, Sumiko and her family find themselves being shipped to an internment camp in one of the hottest deserts in the United States. The vivid color of her previous life is gone forever, and now dust storms regularly choke the sky and seep into every crack of the military barrack that is her new "home." Sumiko soon discovers that the camp is on an Indian reservation and that the Japanese are as unwanted there as they'd been at home. But then she meets a young Mohave boy who might just become her first real friend...if he can ever stop being angry about the fact that the internment camp is on his tribe's land. With searing insight and clarity, Newbery Medal-winning author Cynthia Kadohata explores an important and painful topic through the eyes of a young girl who yearns to belong. Weedflower is the story of the rewards and challenges of a friendship across the racial divide, as well as the based-on-real-life story of how the meeting of Japanese Americans and Native Americans changed the future of both.

OK, so I actually read-er, started-this for a book club. It was the same book club where I read The Giver, which I really liked and would have never picked up on my own. So, I figured that maybe...hopefully, I'd like this one too, even though, again, I wouldn't pick it up on my own.

There was a reason I wouldn't have picked it up.

The plot didn't have all that much of an original premise. And it dragged, even when they brought her family to the camps, nothing seemed to happen.

I also think that the characters were lacking. Sumiko felt too young and naive for me to relate to her, and I didn't love any of her other family members.

The writing was average. Certainly nothing to stick around for. The narration was, like Sumiko, very young and boring.

Basically, this book put me to sleep. I talked to a girl in the club who shares similar taste in books with me, and she complained about how boring it was too. I was thinking about this book recently and realized that I didn't want to finish it. I would not recommend it, and I don't know why it won a medal.