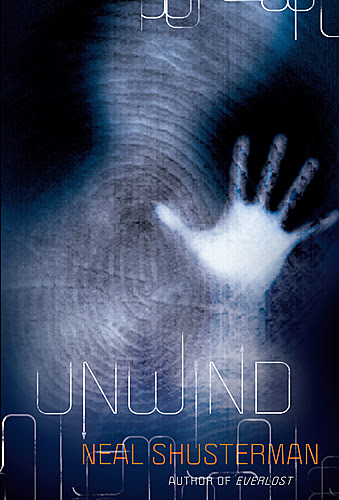 
In a society where unwanted teens are salvaged for their body parts, three runaways fight the system that would "unwind" them Connor's parents want to be rid of him because he's a troublemaker. Risa has no parents and is being unwound to cut orphanage costs. Lev's unwinding has been planned since his birth, as part of his family's strict religion. Brought together by chance, and kept together by desperation, these three unlikely companions make a harrowing cross-country journey, knowing their lives hang in the balance. If they can survive until their eighteenth birthday, they can't be harmed -- but when every piece of them, from their hands to their hearts, are wanted by a world gone mad, eighteen seems far, far away. In Unwind , Boston Globe/Horn Book Award winner Neal Shusterman challenges readers' ideas about life -- not just where life begins, and where it ends, but what it truly means to be alive.
---------------------------------------------------------------

I hadn't heard if this until my friends raved to me about it; they told me how amazing it was constantly. I didn't enjoy it as much as them, unfortunately. But I did enjoy it.

The plot is extremely original; besides it being set in the future, there really is nothing that I've read or heard of like it. I just felt like there was way too much stuff in the middle that was irrelevant to the storyline. All of that made me wade through it, and I considered putting it down because it seemed like it just wasn't going anywhere. It did pick up though, it picked up a lot. The ending was strong and very satisfying.

The characters are what kept me reading through the slow spots. There are three main characters, Connor, Risa, and Lev. I immediately loved Connor's character, and liked Risa more and more until I loved her too, Lev...not so much. He actually kind of annoyed me until the last...ten pages. I just couldn't relate to him on any level and couldn't see any reason behind his actions all most throughout the whole book. But this book had great characterization.

The writing was good. Pretty impressive, considering the genre.

Overall, it was a thought-provoking, really good read that is prone to getting off-track and slow. It wasn't a quick read, but I still cannot say that I didn't thoroughly enjoy it-especially the ending. I'd recommend it.