Girl In The Arena Review 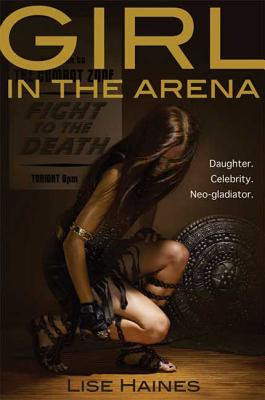 It’s a fight to the death—on live TV—when a gladiator’s daughter steps into the arena Lyn is a neo-gladiator’s daughter, through and through. Her mother has made a career out of marrying into the high-profile world of televised blood sport, and the rules of the Gladiator Sports Association are second nature to their family. Always lend ineffable confidence to the gladiator. Remind him constantly of his victories. And most importantly: Never leave the stadium when your father is dying. The rules help the family survive, but rules—and the GSA—can also turn against you. When a gifted young fighter kills Lyn’s seventh father, he also captures Lyn’s dowry bracelet, which means she must marry him... For fans of The Hunger Games and Fight Club, Lise Haines’ debut novel is a mesmerizing look at a world addicted to violence—a modern world that’s disturbingly easy to imagine.

First, let's get something straight: this book is not anything like The Hunger Games. The description may sound like it, but it really isn't. I can see where people would compare them, but they are both unique and barely have any similarities. Now, with that being said:

I really enjoyed Girl In The Arena. It's fast paced, has characters that were easy to love/hate, and was just an all-around good read.

The plot alone is fantastic. It goes deeper than being just a dystopian novel if you want it to be, but it doesn't preach like it could and still lets you enjoy it. The world of Girl In The Arena is a lot like modern day America, besides the gladiators, which made it even more easy to imagine-which also makes it that much more frightening. There was actually less action then I'd thought there would be, and at times it can be just a little slow, but it quickly picks back up.

I quickly related to and loved the protagonist, Lyn. She has to juggle her mother who's at her wits end (who can be annoying at times, but you understand why and feel deeply sorry for her) and her little brother with special needs, Thad (another character that I loved immediately!). I could never seem to decide if Lyn should be with Uber-the lovable giant who defeated and killed her father in the arena-or her best friend Mark-the funny guy who would go to the end of the world for Lyn. I was happy with her decision. (Or at least, what I think was her decision. It seemed like it.)

Lisa Haines' writing was different from any other kind of writing that I'd ever read. There are no quotations in the book. It's written like this: -Yeah, I say. I quickly adapted to it, however, and it definitely added to the vibe and quality of Girl In The Arena. Besides that, the writing flowed very nicely and Lisa Haines' storytelling was just as good.

The ending shocked me in the best way possible and left me with many, many thoughts on modern society and very pleased with the book. I'm not sure why I've seen so many reviews saying that Girl In The Arena wasn't very good, because I really enjoyed it. And I'd definitely recommend it!

(Thank you Bloomsbury for providing me with a review copy!)

Email ThisBlogThis!Share to TwitterShare to FacebookShare to Pinterest
Labels: 4 and 1/2 stars, Dystopia, Girl In The Arena, Lisa Haines, Review