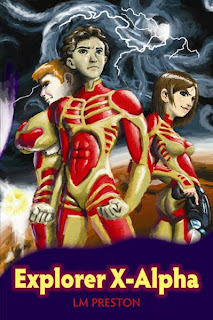 Author: LM Preston
Release Date: February 7, 2010
Pages: 366
Publisher: Phenomenal One Press
Most Appropriate For Ages: 9+
Where I Got It: Author and publisher in exchange for my honest review

For most kids, a trip to space camp is the trip of a lifetime for Aadi it was life altering. After receiving a camp immunization needed for travel to Mars, Aadi finds that the immunization is the catalyst of an insidious experiment. He realizes what is happening too late for a change of fate. The full experiment is set in motion when he and his co-pilot, Eirena, crash in a distant galaxy called Shrenas, where they change and realize the full extent of their power. This turn of events forces him to grow up quickly, accept his change, and to decide to save a world, or to do what he was trained to do dominate it. His power is coveted by the warring leaders of Shrenas, and he is forced to choose sides a decision that may prove just how much humanity he has left.
--------------------------------------------------
Explorer X-Alpha wasn't my favorite book....

The plot was very intriguing, but it did tend to drag. I usually don't read about spaceships type sci-fi (as apposed to, say, the Uglies series), but the plot wasn't bad at all and I think it will definitely keep kids entertained. One thing I didn't quite get, was why the kids kept beating each other up? It seemed very sudden and out of character at some points.

I never connected with the characters at all. They were strong but I just never loved any of them. Sometimes, I would get confused because of two similar names (Dakota and Damien) who also had semi-close personalities.

I've heard some heavy criticism on LM Preston's writing, but I never thought it was that bad. I thought that the dialogue was kind of stiff, and that could be one of the reasons that I never connected with the characters, but overall LM Preston's writing was good. She especially shines during action scenes.

So Explorer X-Alpha wasn't the book for me. But I'm definitely not it's targeted audience, either. I'd probably recommend the book to younger boys and sci-fi fans.