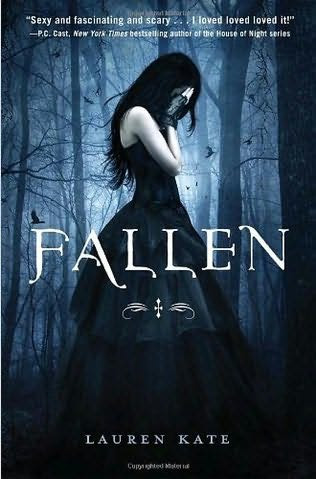 The plot was slow. You don't get answers to the millions of questions that Lauren Kate gives you until the last 150 pages or so. Once it got to that point, I enjoyed it a whole lot more. I think it probably could've been shorter, and had a faster pace. (Or one or the other.)

The characters were good. Luce was easy to relate to, but towards the beginning I would think "He's not interested!" but apparently book characters can't read my mind. Who knew? Aside from that I liked Luce. I don't know why, but I never completely fell for Daniel. Near the end I was getting close, but I'm still not swooning. I really, really loved Penn, Luce's best friend. I also really liked super-hyper Arianne, another one of Luce friends. I really liked Cam a lot well...at first.... But, although all of the characters are at a reform school, they just seemed to be...normal high-schoolers. That definitely turned me off a little.

I really enjoyed Fallen's writing. She crafts a dark, gothic, romantic setting very well. Lauren Kate has definitely found the right genre for her. The storytelling was good too.

Like I said, the last 150 pages were my favorite, and the ending rocked. Except for the fact that Lauren Kate still leaves you with so many questions. Too many questions. So, yeah, Fallen had its flaws. But I still enjoyed it. And of course, I'll be reading Torment, the next installment in the Fallen series. I'd recommend it to fans of the paranormal genre.