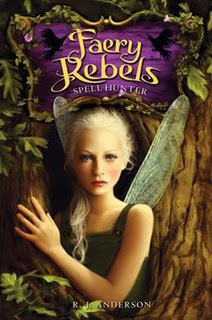 Author: R.J. Anderson
Release Date: April 28, 2009
Pages: 328
Publisher: HarperCollins
Most Appropriate For Ages: 10+
Where I Got It: Won from Fantastic Book Review

Forget everything you think you know about faeries. . . . Creatures full of magic and whimsy? Not in the Oakenwyld. Not anymore. Deep inside the great Oak lies a dying faery realm, bursting with secrets instead of magic. Long ago the faeries mysteriously lost their magic. Robbed of their powers, they have become selfish and dull-witted. Now their numbers are dwindling and their very survival is at stake. Only one young faery—Knife—is determined to find out where her people's magic has gone and try to get it back. Unlike her sisters, Knife is fierce and independent. She's not afraid of anything—not the vicious crows, the strict Faery Queen, or the fascinating humans living nearby. But when Knife disobeys the Faery Queen and befriends a human named Paul, her quest becomes more dangerous than she realizes. Can Knife trust Paul to help, or has she brought the faeries even closer to the brink of destruction? Talented newcomer R. J. Anderson creates an extraordinary new fantasy world and weaves a gripping tale of lost magic, high adventure, and surprising friendship in which the fate of an entire realm rests on the shoulders of one brave faery rebel.
----------------------------------------------------------

Faery Rebels was a delightful tale that kept me up late flipping pages furiously because I couldn't put it down.

The plot is simple, yet original. It was low on action, but I never saw the twists coming, and it kept me guessing until the very end. It was amazing to watch Knife build friendships, get herself into very unappealing situations, and rebel against the rules of her Oak. I didn't really get hooked until the ending, though.

Knife was a great character. She was logical, smart, overly curious, and a fighter til the very end. Paul might have been my favorite character though. Knife finds him recently handicapped and depressed, but he grows so much in such a short time. And then there's the rest of Knife's faery friends-Thorn, Valerian, Wink, and Campion. Each one has their own quirks and no two are alike.

R.J. Anderson's writing was beautiful. It just flowed so perfectly, and she describes the faery Oak with such ease it's almost like she's been there herself.

The ending was just...wow. I hadn't realized that I had connected with the characters as much as I had, and it was almost like someone had punched me in the gut. Things wrapped up so well, though. Overall, this was a pretty book that I'd recommend to faery fans that don't need an action-driven plot and can just enjoy a good story.

This is one of the books being offered in my 200 Follower Shin-Dig! Go here to enter to win it.