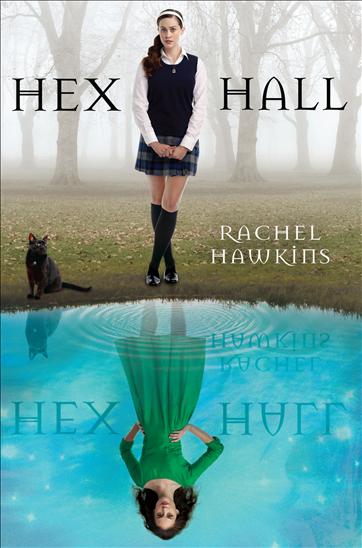 Author: Rachel Hawkins
Release Date: March 2, 2010
Pages: 323 (ARC)
Publisher: Disney Hyperion
Most Appropriate For Ages: 11+
Where I Got It: For review from publisher

Three years ago, Sophie Mercer discovered that she was a witch. It's gotten her into a few scrapes. Her non-gifted mother has been as supportive as possible, consulting Sophie's estranged father--an elusive European warlock--only when necessary. But when Sophie attracts too much human attention for a prom-night spell gone horribly wrong, it's her dad who decides her punishment: exile to Hex Hall, an isolated reform school for wayward Prodigium, a.k.a. witches, faeries, and shapeshifters.

By the end of her first day among fellow freak-teens, Sophie has quite a scorecard: three powerful enemies who look like supermodels, a futile crush on a gorgeous warlock, a creepy tagalong ghost, and a new roommate who happens to be the most hated person and only vampire on campus. Worse, Sophie soon learns that a mysterious predator has been attacking students, and her only friend is the number-one suspect.

I knew as soon as I heard Becca Fitzpatrick say how amazing Hex Hall was, that I needed to read it. Then the cover came. I needed it. Then I began following Rachel on twitter (@LadyHawkins) and saw that she was hilarious. I needed it. So, yeah, I was really, really excited for Hex Hall. I'd hyped it up in my mind. It was a dangerous move, but I took it.

And now, I need the sequel.

The premise of Hex Hall grabs you immediately. It's full of mystery, romance, friendship, and magic and every paranormal creature you can imagine. It has a great plot without being too confusing and is constantly throwing twists and turns your way. I was completely enthralled throughout the entire novel.

The characters are so realistic. From our sarcastic, witty main character Sophie (who I loved!), to the queen evil witch at Hex Hall, Elodie (who I loved to hate!), each character is unique and has hidden depths. (Hex Hall flashback...ok, flashback over. Sorry about that.) I almost immediately fell in love with Archer, Sophie's crush/Elodie's boyfriend. And Sophie, unlike a lot of characters in YA these days, has a great best friend, Jenna. They're both so loyal to each other and that's very refreshing and great to see.

But of course a book can't be great without great writing. And this definitely had great writing. Rachel Hawkins writing was very vivid and I could feel all of the characters emotions and picture Hex Hall so clearly in my mind. The writing/narration is also hilarious. Rachel Hawkins is a fabulous storyteller and should be welcome to the YA genre with open arms and plenty of stalkers.

There had to be something wrong with Hex Hall, right Jessica? Um...no, not really. Hex Hall was an amazing debut and I am quite literally dying for the sequel. If you're not the first in line to get a copy of Hex Hall at your local book store, then you're crazy.