Judging A Book By It's Cover: Once A Witch

So, today the cover I'm judging is: 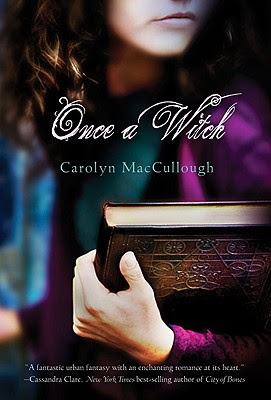 I like it! The colors are definitely eye-catching, the book makes me think of a million possible synopsis' for Once A Witch, and they show just enough of the girl's face to leave some to the imagination, but enough to still look good too. And the font's edgy and new. Definitely one I would pick up based on the cover.

Now that we've judged the cover, here's what the book is about:

Tamsin Greene comes from a long line of witches, and she was supposed to be one of the most Talented among them. But Tamsin's magic never showed up. Now seventeen, Tamsin attends boarding school in Manhattan, far from her family. But when a handsome young professor mistakes her for her very Talented sister, Tamsin agrees to find a lost family heirloom for him. The search—and the stranger—will prove to be more sinister than they first appeared, ultimately sending Tamsin on a treasure hunt through time that will unlock the secret of her true identity, unearth the sins of her family, and unleash a power so vengeful that it could destroy them all. This is a spellbinding display of storytelling that will exhilarate, enthrall, and thoroughly enchant.

Email ThisBlogThis!Share to TwitterShare to FacebookShare to Pinterest
Labels: Judging A Book By Its Cover, Once A Witch