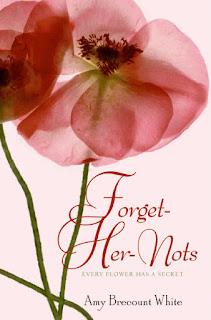 Author: Amy Brecount White
Release Date: March 2, 2010
Pages: 365 (ARC)
Publisher: Greenwillow Books
Most Appropriate For Ages: 12+
Where I Got It: From Around The World Tours

Something—some power—is blooming inside Laurel. She can use flowers to do things. Like bringing back lost memories. Or helping her friends ace tests. Or making people fall in love. Laurel suspects her newfound ability has something to do with an ancient family secret, one that her mother meant to share with Laurel when the time was right. But then time ran out. Clues and signs and secret messages seem to be all around Laurel at Avondale School, where her mother had also boarded as a student. Can Laurel piece everything together quickly enough to control her power, which is growing more potent every day? Or will she set the stage for the most lovestruck, infamous prom in the history of the school?
-------------------------------------------------------------------
Forget-Her-Nots was a light, fun, magical read.

I've never been very interested in flowers, but I was fascinated by the flower language and flower magic in Forget-Her-Nots. The plot moved at a good pace and kept me reading.

The characters were okay. I liked Laurel but I hated how she let Tara (our typical mean popular girl) push her around so easily. She never stood up to Tara once, and actually did stuff for her, which I didn't get. I also really liked Laurel's friend Kate, who's pretty popular but still is a good friend to Laurel, even if Laurel isn't popular. I'm not one to go along with stereotypes so that immediately impressed me. Rose, Laurel's cousin, provided a lot of witty sarcasm, which is something that just about every book needs. Justin, Laurel's romantic interest throughout the book, never stood out in my mind as an amazing guy, and the romance between Laurel and him seemed a little sudden. As for Ms. Suarez, I didn't really get her. One minute she'd seem really relaxed and the next she would seem really uptight. It was odd.

The writing was pretty good, especially when Amy Brecount White describes the appearance and smells of flowers. Laurel's strong emotions are conveyed well, something else about her writing that impressed me.

As far as I know, there won't be a sequel, which is fine since the ending wrapped things up nicely. Overall, a light, quick read with an original and interesting plot.