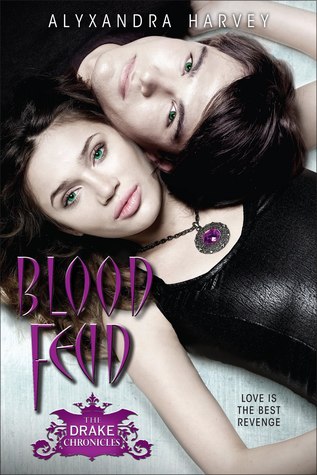 Author: Alyxandra Harvey
Release Date: June 22, 2010
Pages: 272 (ARC)
Publisher: Walker Books For Young Readers
Most Appropriate For Ages: 12+
Where I Got It: Around The World Tours
Other titles in series: Hearts At Stake (which I would recommend reading before this)

It's been centuries since Isabeau St. Croix barely survived the French Revolution. Now she's made her way back to the living and she must face the ultimate test by confronting the evil British lord who left her for dead the day she turned into a vampire. That's if she can control her affection for Logan Drake, a vampire whose bite is as sweet as the revenge she seeks.

The clans are gathering for Helena's royal coronation as the next vampire queen, and new alliances are beginning to form now that the old rifts of Lady Natasha's reign have started to heal. But with a new common enemy, Leander Montmarte—a vicious leader who hopes to force Solange to marry him and usurp the power of the throne for himself—the clans must stand together to preserve the peace he threatens to destroy.

This second adventure in the Drake Chronicles—told from both Logan's and Isabeau's perspectives—has all the same butt-kicking action, heart-pounding romances and snarky humor that readers loved in Hearts at Stake, as well as exciting new revelations about the vampire dynasties to keep readers coming back for more.
------------------------------------
When I read the description for Blood Feud the first time I must admit that I was slightly horrified that they were taking the focus away from my beloved Lucy and Solange and instead putting the spotlight on Logan and some new chick. I should've had more faith in Alyxandra Harvey.

The plot was action-packed, as expected, but still had a very good story to go along with it instead of just being "Hey let's kick some butt for no reason cause people like action books!" The Drake Chronicles has actually progressed to be a really original and interesting vampire book, with a little history thrown in with Blood Feud.

Like I said, I was worried about ditching my Heart's At Stake's fantastic protagonists (which were still included in the book, but not nearly as much), but I still loved them! From what I saw of Logan in Hearts At Stake I wouldn't expect him to be as sweet and sensitive as he was. And man does Alyxandra Harvey know how to create some kick-butt chicks! Isabeau was another great character, and she brought a whole new vampire storyline with her that I loved and would loved to have heard more about. There wasn't as much humor as in Hearts At Stake, but there was still some, of course.

Alyxandra Harvey is a brilliant storyteller, and her writing was good too. But I mean the woman can tell a great story!

Even though the ending wrapped things up nicely, I'm still dying for the next book. I think I may be addicted to this series. Not that there's anything wrong with that.

How kid friendly is it? Pretty. There's not a lot of gore, but there is violence as well as a little language.