Guardian of the Dead Review 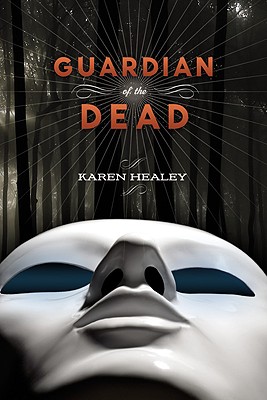 Author: Karen Healey
Release Date: April 1, 2010
Pages: 352 (ARC)
Publisher: Little, Brown Books For Young Readers
Most Appropriate For Ages: 14+
Where I Got It: Around The World Tours

In less than a day I had been harassed, enchanted, shouted at, cried on, and clawed. I’d been cold, scared, dirty, exhausted, hungry, and miserable. And up until now, I’d been mildly impressed with my ability to cope.

At her boarding school in New Zealand, Ellie Spencer is like any ordinary teen: she hangs out with her best friend, Kevin; obsesses over her crush on a mysterious boy; and her biggest worry is her paper deadline. Then everything changes: In the foggy woods near the school, something ancient and deadly is waiting.

Karen Healey introduces a savvy and spirited heroine with a strong, fresh voice. Full of deliciously creepy details, this adventure is a deftly crafted story of Māori mythology, romance, betrayal, and war.

I had my share of issues with Guardian of the Dead, but it was enjoyable.

I really enjoyed the Maori mythology behind the story. I hadn't heard much about it at all, but it was definitely my favorite aspect of the book. The plot is very fast-paced and action packed once you get past the first 100 pages, and even then the mystery and great characters will keep you flipping pages. Sadly, it just seemed to lack...something. I'm not even really sure what it was, honestly, which may seem unfair, but that's just my opinion.

I loved Ellie, the main character. She had some martial arts training, so she wasn't completely defenseless in the midst of all of the action, and at one point she was literally beating the truth out of someone. That was COOL. She also isn't twiggy like most of the female protagonists that I've read about, and she's got a certain attitude that female protagonists lack. Mark, Ellie's love interest was...OK. He...OK, I'll tell you my real problem with him: he cried way too much. The book takes place within the span of a few days, and Mark cried three times. The second time he cried was understandable, but the other times were really random and just made him look like a wimp. I clearly like stronger guys. Other than that, he just wasn't nearly as swoon-worthy as the author tried to make him. This also really hurt his and Elli's romance for me. All of the side characters were really interesting and pretty fun to read about.


The writing was good, and it was written in a way that didn't go over my head. Karen Healey and her witty storytelling will be welcome in the YA world.

Overall, a decent book with some great mythology and a spirited heroine and a wimpy love interest. I think this is a stand-alone novel, but if there was a sequel I'd read it. I'd recommend it.

How kid friendly is it? I think this is targeted towards the slightly more mature reader. There are mentions of sex as well as rape, though never in detail. There's also language and a small amount of violence.