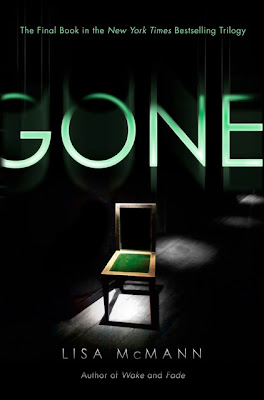 Synopsis contains spoilers for those who haven't read Wake and Fade

Release Date: February 9, 2010
Pages: 224 (Hardback)
Publisher: SimonPulse
Most Appropriate For Ages: 14+
Where I Got It: Given to me for my birthday
Other titles in the series: Wake and Fade


The third and final book in the paranormal teen series that includes the books: Wake and Fade.
Janie thought she knew what her future held. And she thought she'd made her peace with it. But she can't handle dragging Cabel down with her.
She knows he will stay with her, despite what she sees in his dreams.
He's amazing.
And she's a train wreck.
Janie sees only one way to give him the life he deserves--she has to disappear.
And it's going to kill them both.
Then a stranger enters her life--and everything unravels. The future Janie once faced now has an ominous twist, and her choices are more dire than she'd ever thought possible. She alone must decide between the lesser of two evils.
And time is running out...
------------------------------------------
I went into Gone a little nervous. I'd heard lots of people say that Gone didn't live up to the expectations that the first two books, Wake and Fade, had set. I'm very glad to say that I disagree.

Sure, there is the lack of mystery, and I guess it could've been thrown in, but I also felt like Janie needed time to step away from solving others mysteries and to solve her own. The plot is just as fast-paced and intriguing as in the first two novels in the series. It's also just as sad.

I love series. I love being able to revisit some of your favorite characters in a different situation with different problems to solve. Janie is as strong and entertaining as ever, and you can really feel for her and rationalize with her decisions. And Cabel is just as sweet and swoon-worthy as we've come to expect. We see more of Janie's mom in Gone, and I must say that I don't know how Janie does it.

Loved Lisa McMann's writing, as always. I'm sad that this series is over but I know that I will be reading whatever McMann puts out until I'm given a reason not to.

The ending was...well, an end. The end. I don't like those kind of endings very much, but I think this one was done well. I know that it definitely satisfied me. Overall, a great addition, and ending, to a great series.