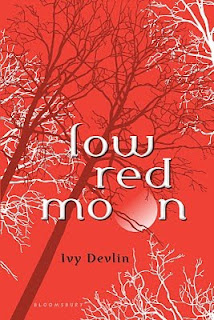 Publisher: Bloomsbury
Most Appropriate For Ages: 13+
Where I Got It: For review for tour

The only thing Avery Hood can remember about the night her parents died is that she saw silver—deadly silver, moving inhumanly fast. As much as she wants to remember who killed them, she can't, and there's nothing left to do but try to piece her life back together. Then Avery meets the new boy in school—Ben, mysterious and beautiful, with whom she feels a connection like nothing she's ever experienced. When Ben reveals he's a werewolf, Avery still trusts him—at first. Then she sees that sometimes his eyes flash inhuman silver. And she learns that she's not the only one who can't remember the night her parents died.Part murder mystery, part grief narrative, and part heart-stopping, headlong romance, Low Red Moon is a must-read for teen paranormal fans.
----------------------------
I refuse to compare Low Red Moon to Twilight. This has been done with countless other books, this one included, and I don't think it's fair to anyone. So I won't do that, even though I totally could....However I will say that this book is aimed to readers who enjoyed Twilight, definitely.

I will also start this review with one of my biggest problems about Low Red Moon: the romance went WAY too fast. By page 60 Ben and Avery are already prepared to go all the way, and this is only on their second encounter. I swear these two were more horny than "in love" since sex is all either of them seemed to care about. (Yes I can see why they may move a little fast, but come on, that is really fast.) Although I will say that I did enjoy their connection, but it could've developed at a smoother pace.

Maybe one of the reasons I didn't like how fast the romance moved has something to do with not liking the characters. Avery never really showed much of a personality aside from the forest, grieving over the loss of her parents, and being in love with Ben...wait, no, that's no entirely true. She also seemed to enjoy disobeying her Grandmother (who was the one character I liked) even when it's clearly for her own good or when she knew it would hurt her Grandma. Ben wasn't too bad, but he was very vague and beautiful and I've just read his type before.

As for the plot, I did enjoy that. I didn't know in advance who the murderer was, which is always nice. And I enjoyed the paranormal aspect of it as well, even if it wasn't all that original.

The writing was grabbing. But, and maybe this was just because I have the ARC, there seemed to be a lot of too-long sentences, or too many paragraphs ending in dashes. This could totally just be me being particular, but it stood out to me.

Like I mentioned, I think this one is aimed for readers who are still in their Twilight phase. I've grown and become pickier since my Twilight phase, so maybe this one just wasn't for me. So although it doesn't really offer anything new to the YA paranormal genre, I do think it has it's place with readers.