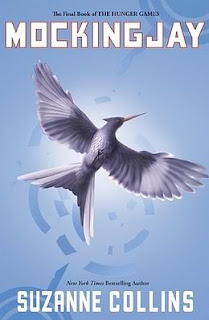 Publisher: Scholastic
Most Appropriate For Ages: 14+
Where I Got It: For review
Other books in series: The Hunger Games, Catching Fire
But the book on Amazon

Against all odds, Katniss Everdeen has survived the Hunger Games twice. But now that she's made it out of the bloody arena alive, she's still not safe. The Capitol is angry. The Capitol wants revenge. Who do they think should pay for the unrest? Katniss. And what's worse, President Snow has made it clear that no one else is safe either. Not Katniss's family, not her friends, not the people of District 12. Powerful and haunting, this thrilling final installment of Suzanne Collins's groundbreaking The Hunger Games trilogy promises to be one of the most talked about books of the year.
---------------
I'm gonna go ahead and say that I'm going to be breaking the world record for "Number of "Wows" In A Review". My vocabulary isn't extensive enough to think of any other words/sounds that do this book justice. Maybe I'll have to look up synonyms or something, but there won't be enough. Anyways:

Katniss and Peeta have gone through so much these past few two years. Unimaginable, horrible things. Peeta and Katniss both have become one of my favorite characters. So much so, that they're like my friends (who never acknowledges my presence, but still). Have you ever watched one of your friends lives fall apart at the seams? It's painful. But, then again, this isn't anything new. Still....Wow.

And, you know, I thought I knew Suzanne Collins' usual twists by now. Who will die, when certain events will happen, all that. Wow, I am wrong. So wrong. Collins makes me feel like a book-newbie.

I can't make this review too long, because it's very hard to not give anything away, so I'll leave you with this: I wasn't expecting to be disappointed, and I wasn't. Wow. (Wow count: 4.)

Edit: Since some of you asked, the ending was devastating for me in some areas, of course. But it fit, I guess. However, I, unlike others from what I've heard, absolutely loved the epilogue. Sue me.

How kid friendly is it? Violence, gore...

Should I read it? IF you have read the first two books in the series, then most definitely.