Naturally, my WoW is: 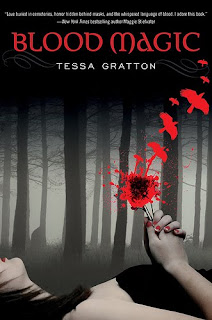 For Nick Pardee and Silla Kennicot, the cemetery is the center of everything.

Nick is a city boy angry at being forced to move back to the nowhere town of Yaleylah, Missouri where he grew up. He can’t help remembering his mom and the blood magic she practiced – memories he’s tried for five years to escape. Silla, though, doesn’t want to forget; her parents’ apparent murder-suicide left her numb and needing answers. When a book of magic spells in her dad’s handwriting appears on her doorstep, she sees her chance to unravel the mystery of their deaths.

Together they plunge into the world of dark magic, but when a hundred-year-old blood witch comes hunting for the bones of Silla’s parents and the spell book, Nick and Silla will have to let go of everything they believe about who they are, the nature of life and death, and the deadly secrets that hide in blood.

Not only does it have that amazing cover and synopsis, but it ALSO had dead kittens and fire! What more can you ask for?