This week I'm waiting on: 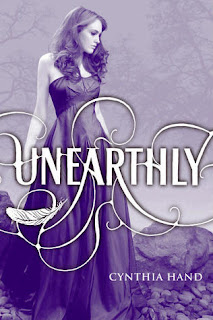 Clara has known she was part-angel ever since she turned fourteen two years ago. But now she is finally getting visions of what her Purpose-a rite of passage for every part-angel-is to be, and it happens to involve a gorgeous guy. Of course, there is the raging forest fire surrounding them, too. When Clara's Purpose leads her family to Wyoming, Clara finds the boy of her visions, Christian, but complicating her mission are her growing feelings for another guy, Tucker. As the day in her visions draws closer, Clara discovers that her Purpose may play into a larger struggle between angels and Black Wings-fallen angels who spread sadness and misery wherever they go. But when the fire erupts and both Christian and Tucker are in danger, who will she choose to save?

From debut novelist Cynthia Hand comes a riveting tale full of supernatural powers, forbidden romance, and the choice between fulfilling your destiny or following your heart.

Coming from HarperTeen January 1, 2011 (Or, if you're a reviewer, you can request it on Netgalley right now....)

Paranormal romances seem to be a hit or miss for me lately, but this one sounds like a major HIT!

Email ThisBlogThis!Share to TwitterShare to FacebookShare to Pinterest
Labels: Unearthly, Waiting on Wednesdays