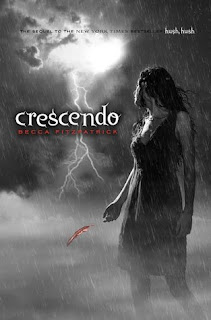 Publisher: Simon and Schuster Children's
Most Appropriate For Ages: 14+
Where I Got It: For review from Around the World Tours
Other titles in series: Hush, Hush

Nora should have know her life was far from perfect. Despite starting a relationship with her guardian angel, Patch (who, title aside, can be described anything but angelic), and surviving an attempt on her life, things are not looking up. Patch is starting to pull away and Nora can't figure out if it's for her best interest or if his interest has shifted to her arch-enemy Marcie Millar. Not to mention that Nora is haunted by images of her father and she becomes obsessed with finding out what really happened to him that night he left for Portland and never came home.

The farther Nora delves into the mystery of her father's death, the more she comes to question if her Nephilim blood line has something to do with it as well as why she seems to be in danger more than the average girl. Since Patch isn't answering her questions and seems to be standing in her way, she has to start finding the answers on her own. Relying too heavily on the fact that she has a guardian angel puts Nora at risk again and again. But can she really count on Patch or is he hiding secrets darker than she can even imagine?

Forget everything from Hush, Hush. Nora is no longer our level headed good girl, but instead stupid and reckless. Patch is no longer the lovable bad boy, but just a jerk.

But, like with everything else about Crescendo, you have to think ..."Or maybe I'm wrong." You never know if what people say or do is true, or if the plot's going where you want it to go or not. You really just don't know til the very climactic ending.

Crescendo will tear your heart to shreds, then put it back together...only to tear it up again. This cycle repeats itself throughout the entire novel until you're torn between throwing it at the wall and abandoning the book and not wanting to stop reading. It's like a roller coaster for your emotions.

I think this is how you know a book is good: you get so invested that you just wanna go inside the book and kick some butt. It's annoying, but true. So, even with the below paragraph, I feel like I should point out that I did really like the book. Really, really loved it.

When I mentioned above that Nora acted stupid, I mean SO stupid. She let her jealousy blind her and control every single thing she did. I wanted to STRANGLE her through more than half of the book! And when she's not being stupid, she's being way too clingy.

I have to point out just how much more I loved Vee in this book. In Hush, Hush she was funny but then would do the stupidest things. But in Crescendo, Vee looks out for Nora (her safety, need to feed, and just always being there for her) instead of the other way around. It's like she took friend lessons or something! But not without dropping the humor I love, of course.

Crescendo was just as suspenseful, hot, and full of twists, so I do not see how fans of Hush, Hush could be disappointed. Becca Fitzpatrick proves that it wasn't just huge beginner's luck with a sequel that was just as good as her debut novel (if not better).

Characters: It's a love/hate deal...but mostly love.
Writing: Very good. I am now referring to Fitzpatrick as "Da Mystery Master!"
Ending: BECCA HOW COULD YOU DO THAT TO ME?
Kid friendly? Not very. There's quite a few mentions of sex, drinking, and pot-growing as well as a little swearing.
Should I read it? OH YEAH. If you've read Hush, Hush first, because if not you'd be SO LOST.
Overall: