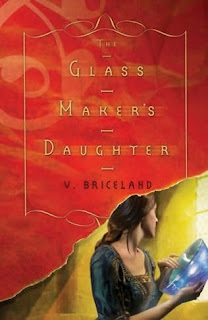 
Magic lies at the heart of Cassaforte, medieval city of bewitchments and intrigue. Cassaforte is home to sixteen-year-old Risa Divetri, whose fate is about to be decided by the gods.

Risa has led the sheltered life of a nobleman's daughter, but soon she plans to leave home to study the family craft-creating enchanted glass objects. When the gods are consulted to determine which school she will attend, the impossible happens: Risa remains unchosen. The rejection sends Risa into a spiral of shame, anger, and confusion. If she's not meant to be a glass maker, what will she do?

But when Cassaforte's age-old magic begins to unravel and dark forces threaten the kingdom, Risa's fiery spirit and untapped powers take her on a perilous journey—one that will lead her to her true destiny.

The Glassmaker's Daughter was a delightful fantasy adventure that is never low on thrills.

I will admit that the first few chapters confused me. There's a lot of terms that are used that I wasn't familiar with at all, and there wasn't an index, so you're left to just figure it out on your own. Luckily after a while I learned them.

After that, I thoroughly enjoyed the unique story that blends story elements like growing up, magic, friendship, challenges, and even a little romance effortlessly. For some reason I always seem to be afraid that fantasies will be really slow and drawn out, but that definitely wasn't the case with The Glassmaker's Daughter. Within the first couple of chapters our main character is already making new friends and throwing herself in dangerous situations to save strangers.

As for Risa, I definitely enjoyed her character. Though she could definitely have some self-confidence issues, she proved herself to be a brave heroin that I could enjoy reading about. But I wouldn't say that she was my favorite character. That spot can only be filled by Milo, the city guard that Risa befriends despite her much higher social status (which, by the way, ignoring the social rules? That scored Rise major brownie points from me).

The Glassmaker's Daughter left me grinning at my overall enjoyment of the novel, and because the ending was very sweet and satisfying. I can honestly say that I'm excited to dive into the sequel, The Buccaneer's Apprentice. This one is worth picking up.

Characters: They were each so colorful and fun.
Writing: Very pretty. Impressive.
Ending: Perfect.
Kid friendly? Very. I think there was a swear word or two, but that's it.
Should I read it? Yeah, give it a try.
Overall: