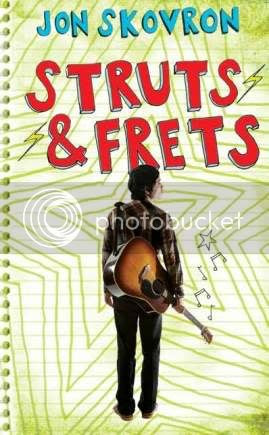 Pages: 304 (Hardcover)
Publisher:Amulet Books
Most Appropriate For Ages: 14+
Where I Got It: Library

Told in a voice that’s honest, urgent, and hilarious, Struts & Frets will resonate not only with teenage musicians but with anyone who ever sat up all night listening to a favorite album, wondering if they’d ever find their place in the world.

Music is in Sammy’s blood. His grandfather was a jazz musician, and Sammy’s indie rock band could be huge one day—if they don’t self-destruct first. Winning the upcoming Battle of the Bands would justify all the band’s compromises and reassure Sammy that his life’s dream could become a reality. But practices are hard to schedule when Sammy’s grandfather is sick and getting worse, his mother is too busy to help either of them, and his best friend may want to be his girlfriend.

When everything in Sammy’s life seems to be headed for major catastrophe, will his music be enough to keep him together?

This isn't my normal type of book, and I hadn't heard much about it. I just randomly saw it at the bookstore, and decided that I needed to read it. Maybe I had some kind of contemporary craving, I don't know. But it must have been just what I needed, because I really enjoyed it.

I know I've mentioned this once or twice (or twenty times...), but I love music. So when my love of music and books combines, it usually agrees with me. I like indie rock, but I don't know that many bands, so Struts & Frets gave me a few to look up, which is always really nice. But band references aren't the only reason I love books about music, it's the passion behind the music. The descriptions of how it makes you feel, think, react. This book was dead-on in that area, for sure.

And while we're talking about things about this book that were dead-on, let us move on to the characters. Each one was full of their own unique life and quirks, and I want to hang out with them forever and ever. Sammy's passion and confusion really resonated with me, as it should with teens everywhere. He really found himself throughout the novel, and not just him. I think just about every side character did as well, at least a little, which I found extremely cool to witness.

Struts & Frets even proved to have a quality that I, personally, find usually difficult to find in contemporary: it was addictive, and hard to put down. In a nutshell, I was pretty darn impressed by this one. Jon Skovron really knows how to make a story come to life, and I'll definitely be reading whatever he puts out next.


Book Report:
Plot: Really well paced and realistic.
Characters: Awesome with a side of awesome.
Writing: Really clever and easy to read.
Ending: Wraps things up nicely.
Kid friendly? Hmmm...well, there's teen drinking as well as sex, swearing, and smoking.
Should I read it? Yeah, I think you should.
Overall: