As part of a Teen Book Scene tour, today I am giving away the two released books in Laura Kreitzer's Timeless series, Shadow of the Sun and Soul Stalker. Here's more about Shadow of the Sun, the first book: 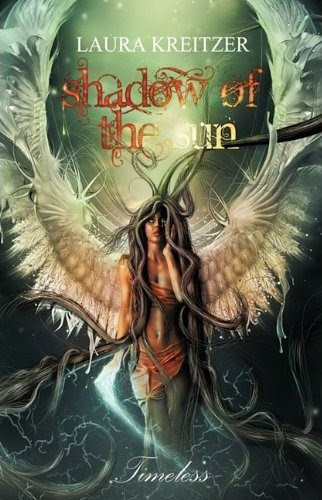 Gabriella's past is a mystery, but that never stopped her from achieving her goals. As a Supernatural Specialist, and far more intelligent than anyone her age, she was always ignored by her peers. Because of the isolation she has always felt, she put her life and soul into her job. Being a Supernatural Specialist hasn't given her the divine intervention she always longed for, until one day a shipment arrives from Italy containing three dead bodies with an uncanny ability to regenerate. Gabriella is frightened and intrigued, but not as scared as she becomes when a dark creature attacks her.

As the bodies come back to life, the plot takes an unexpected twist that you won't see coming. The supernatural world only begins to unfold before her as angels appear, her dreams start to haunt her, and the very past she has forgotten comes back with startling clarity. Romance blooms, escape plans are made, an assassin is out to kill her, and death is only around the corner. But what is more terrifying than all of it is the fact she is the chosen one, the Illuminator, the one who will save them all.

To enter, fill out this form. The contest will close March 2, and is open to US residents only. Good luck!

(Also, expect the winner from my Hex Hall contest to be announced tomorrow!)

Email ThisBlogThis!Share to TwitterShare to FacebookShare to Pinterest
Labels: My Contests, Timeless Series