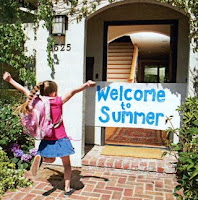 To everyone who cares: I've drawn the winner for my Pink giveaway, and she's been contacted. Moving on...

So my family is starting summer off with a vacation to an indoor water park (which is also where my homeschool prom is, FYI) and then a few days at the beach. I know I won't really be blogging much while I'm away, and wanted to leave you guys with something cool while I'm gone that will get you in the summer spirit as much as I'll be.


One winner will get to pick one of the following books. They're all books that have summer themes or at least take place in summer, and some of them are light and some aren't.

Invincible Summer by Hannah Moskowitz
That Summer by Sarah Dessen
I'll be ordering the book from The Book Depository, so this contest will be international! (To everywhere TBD ships, that is.) It will end May 31. Fill out THIS FORM to enter. (Comments are very appreciated, but not counted as entries.) Good luck!

Email ThisBlogThis!Share to TwitterShare to FacebookShare to Pinterest
Labels: My Contests