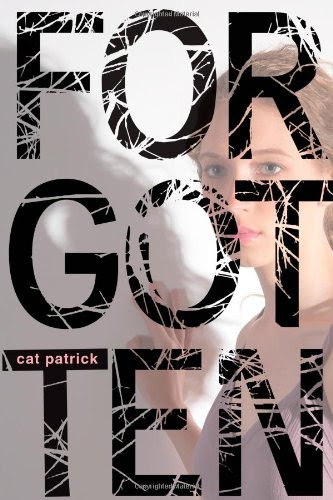 Author: Cat Patrick
Release Date: June 7, 2011
Pages: 294 (ARC)
Publisher: Little, Brown
Most Appropriate For Ages: 12+
Where I Got It: From publicist

Each night when 16 year-old London Lane goes to sleep, her whole world disappears. In the morning, all that's left is a note telling her about a day she can't remember. The whole scenario doesn't exactly make high school or dating that hot guy whose name she can't seem to recall any easier. But when London starts experiencing disturbing visions she can't make sense of, she realizes it's time to learn a little more about the past she keeps forgetting-before it destroys her future.

Part psychological drama, part romance, and part mystery, this thought-provoking novel will inspire readers to consider the what-if's in their own lives and recognize the power they have to control their destinies.

With an intriguing and well-executed concept, Forgotten is a good read.

Usually when I read a book about a girl with a "special ability", I am envious of her, and get annoyed with her when she whines about it. This was not the case with Forgotten. London's "special ability" SUCKED. Seeing the future and forgetting the past? Yeah, no thanks, I'll pass. Luckily though, London didn't get all emo kid about it (like I probably would've). I actually really liked her character.

I also liked Luke, the love interest, and I thought that the relationship between the two of them developed naturally. However, I did feel he was a bit too...perfect, if that makes sense. Unbelievably perfect, you know? But I did like him, I guess I just wished he was a bit more realistic.

So, yeah, there's one problem. I also thought some parts were prone to chessy-ness, and that the ending was too open.

But, in the end, this novel won me over. The mystery in the novel kept me guessing until it was spelled out for me, and I found myself quickly engrossed in Patrick's debut. Her writing style will grab you and make you eagerly await whatever she puts out next. All in all, this one reads like a good girl's night out movie with a twist.

Book Report:
Plot: Grabbing and unique.
Characters: Some were annoying (Jamie) and some could be a little too-good-to-be-true (Luke) but I actually liked all of them a decent amount.
Writing: Easy to read.
Ending: Not what I would've wanted.
Kid friendly? Pretty. There's mentions of sex, and child abduction.
Should I read it? Yeah, it's kind of fluffy but very entertaining and interesting.
Overall:

And thanks to Big Honcho Media, I've got a Digital Photo Keychain and a copy of Forgotten to give to one lucky winner who lives in the US! Ends July 8.

Fill out THIS FORM to enter.

And check out Forgotten's book site, and the following video, one of London's video diaries.