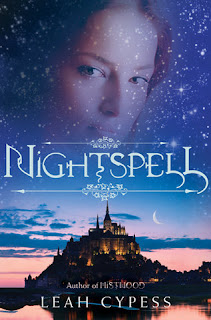 Author: Leah Cypess
Release Date: May 31, 2011
Pages: 336 (HC)
Publisher: Greenwillow Books
Most Appropriate For Ages: 12+
Where I Got It: For review from Teen Book Scene

Here be ghosts, the maps said, and that was all.

In this haunted kingdom, ghosts linger—not just in the deepest forests or the darkest caverns, but alongside the living, as part of a twisted palace court that revels all night and sleeps through the daylight hours.

Darri's sister was trapped in this place of fear and shadows as a child. And now Darri has a chance to save her sister . . . if she agrees to a betrothal with the prince of the dead. But nothing is simple in this eerie kingdom—not her sister, who has changed beyond recognition; not her plan, which will be thrown off track almost at once; and not the undead prince, who seems more alive than anyone else.

Strong is the first word that comes to mind when I think of Nightspell. It was full of strong characters, strong writing, and very strong world-building,.

Though despite the characters strength--which was nice and kind of admirable--I never fully connected to them. Maybe it was the style of writing or something, but I felt more like the characters in this book were my cool acquaintances rather than my BFFs, you know?

I loved the setting so much. It was well thought-out, well executed, and unlike any other world I've read about. The idea that ghosts walked around and were full members of society was just so cool to me.

The pacing was kind of slow towards the beginning, but I still found it hard to put down thanks to the killer plot. If a book has action, sibling issues, and a dash of politics, then why would you put it down? We both know the answer.

When I read Cypess's debut last year, Mistwood, the ending was definitely my least favorite part of it. In my Mistwood review I claimed that, "The way that Isabel's past was explained just sort of popped up and left me confused and wanting to go into more detail about it." Luckily, I didn't have this problem with Nightspell's ending. It built up to it wonderfully to the ending and didn't leave me confused at all.

So despite some minor flaws, Leah Cypess has proved again to me that she's an author to keep an eye on, especially if you're a fan of fantasy.


Plot: Awesome, though it could be a bit quicker.
Characters: Strong, but hard to connect to.
Writing: Very good.

Ending: Very well done.
Kind Friendly? Yeah, definitely. There was some death, but other than that....
Overall: