My Superhero Sister Reviewed By Me and My Sister 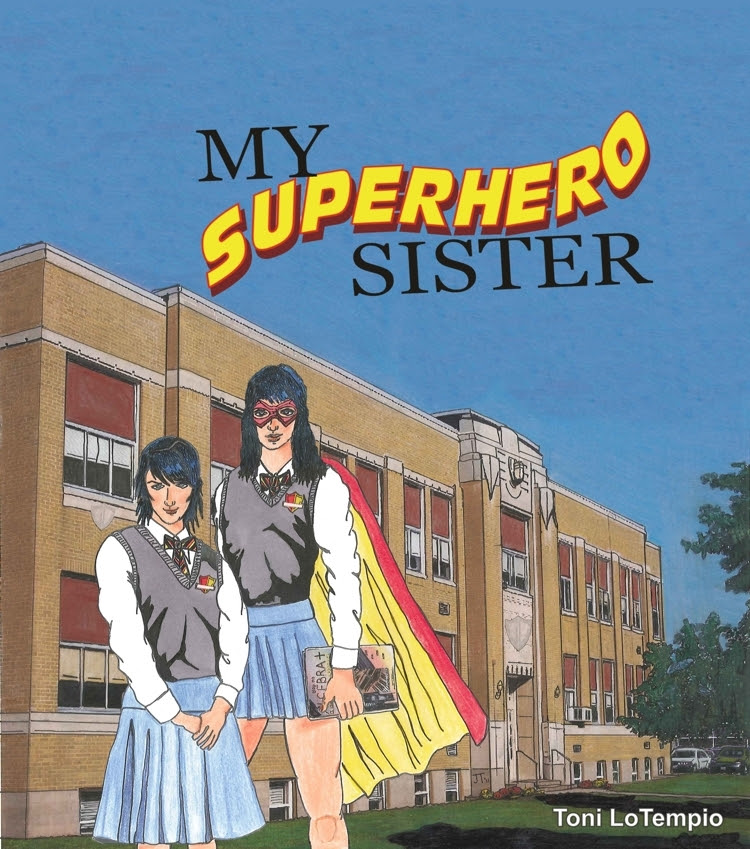 Author: Toni LeTempio
Release Date: January 25, 2011
Pages: 190 (e-galley)
Publisher: self-pubbed
Most Appropriate For Ages: 9+
Where I Got It: For review from author

Holly Hamilton's always felt invisible in her family. How could she not when her older sister Ellen is the co-captain of the cheer squad, a star student, and her town's favorite superhero?

After Anti-Villain robbed the sister's dad of his powers, he had to hang up his cape and retire his superhero alter-ego, Invincible Man, and Ellen took over as Suprema. Now, Anti-Villain's escaped from prison, and is out for revenge. Anyone could be working for Anti-Villain, even the new hunk Tad that Holly has her eyes on.

The Hamilton family quickly realizes that time's running out...and this time, it seems like not Suprema or Invincible Man will be able to stop Anti-Hero. Who will?

I've always had a thing for Super-people. So when I was contacted to review My Superhero Sister, I was super excited (no pun intended). And while it was a decent read, I don't think it was quite old enough for me.

My biggest complaint about the novel might've been Holly. She was very whiny and woe-is-me and I-have-to-prove-myself-to-get-the-guy-cause-just-being-myself-is-lame. Not to mention self involved. When her sister is in trouble, she usually thinks to herself something along the lines of:


"I didn't want Ellen to get hurt, even if we did have our share of problems. Who would help me with my English homework?"*

And she doesn't jokingly tell her friend this. No, this is her inner dialogue, and she thinks similar to this more than once. I'm sorry, but when my sister ever appears to be in trouble, I don't question how it will affect me. It just struck me as very odd.

So, yeah, Holly. Not my favorite character. In fact, I never really liked any of the characters. They were all very flat.

In fact, I think my favorite characters were the villains, Anti-Hero and his sidekick Rodney Beaver. And my favorite part of the novel was the ending. While the rest of the book read more like an unoriginal cliche, the ending was cliched as well, but more in a way like it was parodying the average comic book villain.

Oh, and they kept using the word "fabbo", an abbreviation of the word "fabulous". Maybe this is just because I'm not hip to the young people's new slang, but this bugged me. Lots.

Occasionally, character's Eureka Moment seemed really, really obvious. And it was kinda predictable (but, then again, so is every hero story). Yeah, My Superhero Sister didn't quite click with me, but I have a feeling the younger crowd will like it more.


Book Report:
Plot: Cliched, but well-paced enough.
Characters: Not my favorite.
Writing: Good, though there was sometimes dialogue that I found too stiff.
Ending: Favorite part.
Kid friendly? Very. There's a tiny bit of language, but this one's pretty clean.
Should I read it? Depends.
Overall:

*Not an actual quote. But pretty close, I think....

And now, I've got a review of My Superhero Sister from my little sister Allison.

I had a hard time putting My Superhero Sister down from page one. I thought it was a good, fast read and that it was definitely aimed for the younger crowd. Some of the characters could get pretty annoying, but the ending of the book made up for any of my complaints because it was SO FLIPPIN' AWESOME.  My favorite characters were the villains and Eddie Mcgee. Overall I thought this book was awesome!

Book Report:
Plot: Good.
Characters: Most of them were very annoying.

Writing: I thought it was good.
Ending: LOVED IT.
Kid friendly? Very.
Should I read it? YES DEFINITELY.
Overall: