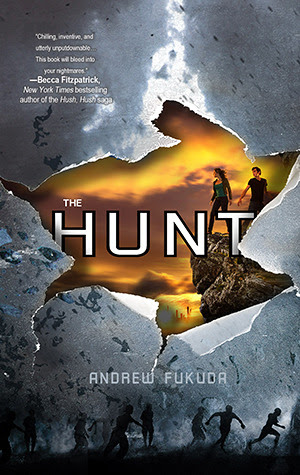 The Hunt, by Andrew Fukuda, is a breath of fresh air in the YA dystopian genre. To keep a genre vibrant and alive, new books have to challenge the boundaries and institutions of that genre. The Hunt most definitely does that.

However, of course, they haven’t. Meet Gene, our main character. Gene is a seventeen year old heper who has been masquerading as a normal member of alien society for his entire life. His mother and sister died when he was very young. He had his father for a while, but then he disappeared too, and now only Gene is left. He goes to school like everyone else, but his entire survival is based around an elaborate system of deceptions. He has to cover his human scent, he can’t laugh, smile, or change the pitch of his voice, and he wears fake fangs. If he is discovered, he will be killed in a very painful instant, so his life is a bit high in stress.

The aliens are extremely similar in appearance to humans, but they have a number of behaviors and physical traits that are different. For instance, they melt when exposed to sunlight, so they are nocturnal and all their buildings are lightproof. They do not express emotion in their voices, they have fangs, and they can move extremely fast. As a race they are aloof and cocky. They invaded and took over Earth because they eat flesh. The aliens crave human flesh, and go in to a terrible bloodlust at even the slightest hint of a human presence. This is why the hepers/humans are extinct. They have all been eaten.

Now, the curveball. It is announced that there are, in fact, hepers still living in captivity, and there is to be a heper hunt. This causes uproar and madness among the people, for the hunter who succeeds in capturing the hepers will eat them. The hunters are to be picked by a lottery, and through some dumb luck, Gene is selected. He travels to the Heper Institute to be trained for the hunt, and, well, from there you’ll have to read the book yourself.

Gene's situation is very interesting. He has lived his whole life in a society he can never really be a part of, being taught that what he secretly is (a heper, what we would call a human) is lesser and weak. He is completely dissociated from humanity, yet, when he has to make a string of hard choices at the end of the book, his own human nature is inescapable. I love stories like this, because through impossible circumstances, they show us what people really are.

This book has a number of very well executed plot twists. I was able to predict a couple in the first half of the book, but the last few really got me, especially the very last one.

Characters: Gene isn't that interesting on his own, but the situations he is placed in and the decisions he makes make him fascinating. The secondary characters are also good. I like how arrogant the aliens are. This isn't a character book, though. It's definitely a plot book.
Plot: Really, really well done. I am impressed. This book is extremely well paced. A pleasure to read.
Ending: Excellent! Fukuda gives a satisfying resolution to the events in this book, while still leaving loose threads to weave in to the sequel. And, he drops a huge bomb on the last page. Wow. No spoilers, go read it!
Writing: This book was definitely written by a dude. You can tell. It's very precise and intentional. Very readable.
Mature Content: Some seriously gross melting aliens, and some fairly gory people-getting-nommed scenes. Nothing ridiculously graphic, but it sticks in your head for a while. Eew.
Overall: Shut your face hole! I, er, Gene, was just getting chased by aliens!!

This is an excellent book. Go read it now.