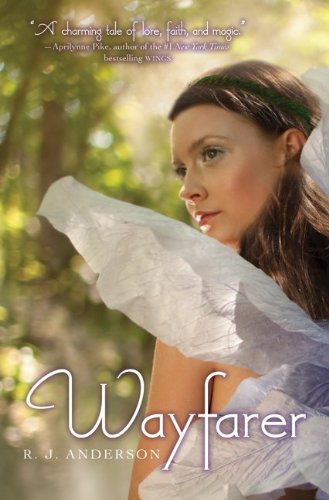 Author: R.J. Anderson
Release Date: June 22, 2010
Pages: 294 (ARC)
Publisher: HarperCollins
Most Appropriate For Ages: 12+
Where I Got It: From Around The World Tours

The faeries of the Oak are dying, and it’s up to a lone faery named Linden to find a way to restore their magic. Linden travels bravely into dangerous new territory, where she enlists the help of an unlikely friend—a human named Timothy. Soon they discover something much worse than the Oakenfolk’s loss of magic: a potent evil that threatens the fate of all faeries. In a fevered, desperate chase across the country, Timothy and Linden risk their lives to seek an ancient power before it’s too late to save everyone they love.

The plot sounds exactly the same as Fairy Rebels: Spell Hunter, but it's really different. It has more action, less romance, and more secrets are unveiled. The plot definitely kept me on the edge of my seat.

I don't think I connected to Wayfarer's characters quite as much as I did in Fairy Rebels: Spell Hunter, but I did like them a lot. I could have done with Linden being a little tougher, but I guess Knife's really the toughest fairy around, so any fairy after her was just going to seem a little weaker in comparison . Speaking of Knife, I loved how R.J. Anderson included Knife and Paul. We never get to see what happens after the happily ever after, so I thought that was really neat that we finally did. I really liked Timothy. He was probably my favorite new character.

R.J. Anderson's writing is, once again, beautiful. I think I'll read whatever she puts out.

Overall, I wasn't disappointed. I definitely recommend it.