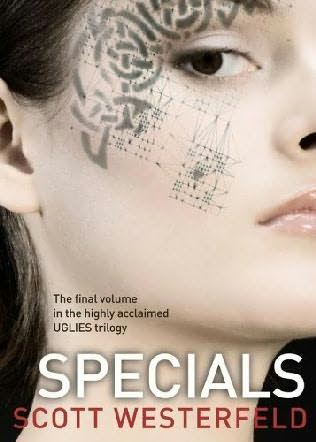 
The words have sent chills down Tally's spine since her days as a repellent, rebellious ugly. Back then Specials were a sinister rumor -- frighteningly beautiful, dangerously strong, breathtakingly fast. Ordinary pretties might live their whole lives without meeting a Special. But Tally's never been ordinary.

And now she's been turned into one of them: a superamped fighting machine, engineered to keep the uglies down and the pretties stupid.

The strength, the speed, and the clarity and focus of her thinking feel better than anything Tally can remember. Most of the time. One tiny corner of her heart still remembers something more.

Still, it's easy to tune that out -- until Tally's offered a chance to stamp out the rebels of the New Smoke permanently. It all comes down to one last choice: listen to that tiny, faint heartbeat, or carry out the mission she's programmed to complete. Either way, Tally's world will never be the same.

Can I start this review by saying that this is an overrated series? I've heard nothing but how amazing they are and I read Uglies, and it was good, but not as good as I'd heard. And these books take me forever to read! This took me the least time to read. But, then again, my mom likes them a lot more than I do, so it's really a matter of opinion.

I've never felt a connection to Tally. I've never related to her, and at at times I don't understand her logic. I don't care for Shay, either. I like the guys, Zane and David, better.

The plot didn't really grab me until the end, which was by far the best part of the book. I actually started to feel for Tally towards the end.

The writing was good, as Scott Westerfield's usually is. Very descriptive, as expected. I'll have to look into getting some of his other books.

(It gets that last half star for Part 3.)