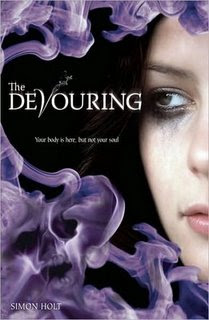 When dark creeps in and eats the light, Bury your fears on Sorry Night. For in the winter's blackest hours, Comes the feasting of the Vours, No one can see it, the life they stole, Your body's here but not your soul..." THE VOURS: Evil, demonic beings that inhabit human bodies on Sorry Night, the darkest hours of the winter solstice. When Reggie reads about the Vours in a mysterious old journal, she assumes they are just the musings of an anonymous lunatic. But when her little brother, Henry, begins to act strangely, it's clear that these creatures exist beyond a madwoman's imagination, and Reggie finds out what happens when fears come to life. To save the people she loves, Reggie must learn to survive in a world of nightmares. Can she devour her own fears before they devour her? The Devouring is an engrossing tale of terror that will have you wondering: what if your worst fears became your living nightmare?

The Devouring is only 231 pages (the last nine pages are an excerpt from the sequel), so it really shouldn't have taken me 4 days to read...and yet it did.

The idea was awesome, but I feel that the whole "my mommy left us" thing got in the way of the story of the Vours. But when the storyline was centered on the Vours, it delivers the promised chills. There were some parts of the book that freaked me out. The book didn't grab me in any parts, even the parts when I felt it should've grabbed me.

Reggie and her brother, Henry-who had been "devoured"-were OK characters. I didn't feel a strong connection with them, even though Reggie wasn't whiny about her situation. Aaron was probably my favorite character, he was quirky, funny, and the only character I felt a slight connection to. Eben was my next favorite, but I was kinda expecting him to die, so I'd made peace with that possibility.

Overall, this book delivers the promised chills...but it doesn't offer you much more than that. It was OK. I'm not sure if I'll be reading the sequel...I'd recommend it...but not in a heartbeat.

But I do love love LOVE the cover.