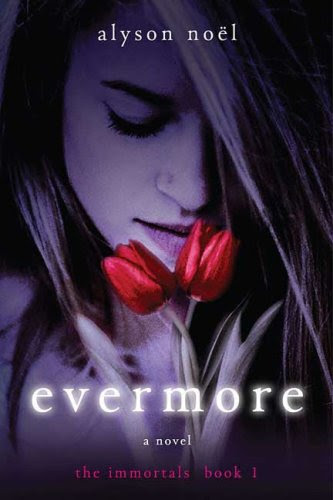 Since a horrible accident claimed the lives of her family, sixteen-year-old Ever can see auras, hear people’s thoughts, and know a person’s life story by touch. Going out of her way to shield herself from human contact to suppress her abilities has branded her as a freak at her new high school—but everything changes when she meets Damen Auguste… Ever sees Damen and feels an instant recognition. He is gorgeous, exotic and wealthy, and he holds many secrets. Damen is able to make things appear and disappear, he always seems to know what she’s thinking—and he’s the only one who can silence the noise and the random energy in her head. She doesn’t know who he really is—or what he is. Damen equal parts light and darkness, and he belongs to an enchanted new world where no one ever dies.
-------------------------------------------------------------------------------

Evermore was such a good, fun read!

The plot kept me guessing about Damen and Ever's past throughout the book, and I was so pleased when the answers to my questions were so original and something that I don't think I ever would have guessed. With some very nice plot twists thrown in, this is a new brand of young adult paranormal romance that stands out from the crowd that's become full of vampires and werewolves. I've heard that this was similar to Twilight, but I didn't see that much resemblance besides a few, minor details.

Ever was realistic and I could relate to her, even though at times I wanted to smack her for being so stupid. Damen is another one of those practically perfect guys that will have fellow female book-worms smitten. Miles was so much fun, and provided some of the best laughs of the book. I loved Miles' character. I really disliked Haven though. She's such a bit-...brat, and was always seemed to be mad at Ever for doing absolutely nothing- more for being concerned about her so-called "friend."

The writing was....It was. Sometimes, it seemed good, but other times, it seemed very premature and I just felt that Alyson Noel could've been more descriptive in some places. But she's a great storyteller.

The ending was somewhat predictable, but still satisfying. I'm glad my library had Blue Moon too, because I can't wait to be swept into such a different paranormal romance again.