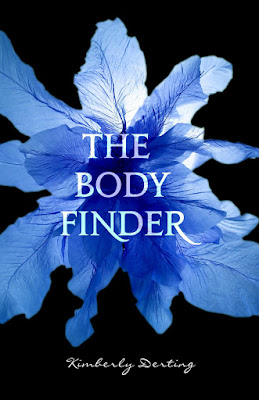 Author: Kimberly Derting
Release Date: March 16, 2010
Pages: 327 (ARC)
Publisher: HarperTeen
Most Appropriate For Ages: 14+
Where I Got It: For review from Dark Faerie Tales Tours

Violet Ambrose is grappling with two major issues: Jay Heaton and her morbid secret ability. While the sixteen-year-old is confused by her new feelings for her best friend since childhood, she is more disturbed by her "power" to sense dead bodies—or at least those that have been murdered. Since she was a little girl, she has felt the echoes the dead leave behind in the world . . . and the imprints that attach to their killers.

Violet has never considered her strange talent to be a gift; it mostly just led her to find dead birds her cat left for her. But now that a serial killer is terrorizing her small town, and the echoes of the local girls he's claimed haunt her daily, Violet realizes she might be the only person who can stop him.

I flew through The Body Finder, I couldn't put down and I never wanted it to end!

The plot throws together a thriller, a romance, and just a tiny bit of paranormal, but it doesn't get too deep into Violet's special ability. The plot is always moving forward and keeps you on the edge of your seat either with question about the killer, or questions about the romance that Violet's began to feel towards her best friend since childhood, Jay.

The book also had some great characters. Violet was a strong, well-rounded female protagonist who was stubborn, realistic, and a lot of fun to read about. And Jay was probably one of the sweetest guys ever. I also love that Violet had some other, very likable friends; Chelsea, Claire, and Jules. They were each unique and funny in their own way.

Kimberly Derting really surprised me with how well she wrote. Everything just flowed so seemingly effortlessly, and I really loved her writing.

I don't really have any complaints about this book. Overall, definitely pick up a copy of The Body Finder. I stayed up in the late hours of the night and tried to read in the dark because it was so addictive. Kimberly Derting is definitely an author to watch, and I cannot wait for whatever she puts out next!