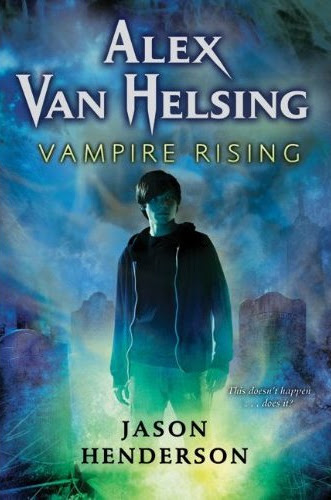 Author: Jason Henderson
Release Date: May 3 , 2010
Pages: 256
Publisher: HarperTeen
Most Appropriate For Ages: 12+
Where I Got It: From Around The World Tours

Fourteen-year-old Alex has no idea that he's descended from the world's most famous vampire hunter, but that changes fast when he arrives at Glenarvon Academy and confronts two vampires in his first three days. Turns out Glenarvon isn't the only school near Lake Geneva. Hidden deep underground lies an ancient university for vampires called the Scholomance. And the deadly vampire clan lord known as Icemaker? You might say he's a visiting professor.

When two of Alex's friends are kidnapped by Icemaker, it's up to Alex to infiltrate the Scholomance and get them back—alive. Assisted by the Polidorium, a top-secret vampire-hunting organization with buried ties to the Van Helsings, Alex dodges zombies, bullets, and lots—and lots—of fangs on his way to thwarting Icemaker's plans and fulfilling his family destiny.

Vampire Rising sounded like it could have been Maximum Ride - the wings + vampires and a male main character, which sounds great to me since I'm very obviously an action (and Maximum Ride) junkee. But Alex Van Helsing: Vampire Rising fell flat for me.

The plot was...decent. I followed it, but action scenes would pop out of nowhere along with some new supernatural creature that didn't get a good entry at all and then I'd feel lost. I think this may be a problem with the writing, or even possibly me, but it definitely took away from my overall enjoyment of the novel.

I never really connected to the characters. At all. None of them had a lot of personality...or any personality, really. I didn't have a favorite or a least favorite.

The writing was decent, except for what I've already explained above. Jason Henderson has already written some comics, I believe, and you can tell by his storytelling.

The ending was OK. Overall, this wasn't the book for me. I managed to finish it but never really got into it. I'm pretty sure there will be another but I don't think I'm going to read it. If it sounds interesting to you, then give it a try. Maybe I just wasn't in the mood.