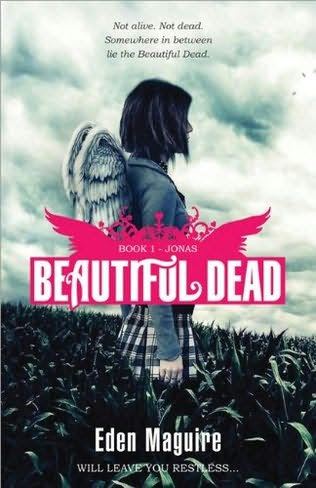 Author: Eden Maguire
Release Date: March 1, 2010
Pages: 288
Publisher: Sourcebooks Fire
Most Appropriate For Ages: 12+
Where I Got It: From Around The World Tours

Something strange is happening in Ellerton High. Phoenix is the fourth teenager to die within a year. His street fight stabbing follows the deaths of Jonas, Summer and Arizona in equally strange and sudden circumstances. Rumours of ghosts and strange happenings rip through the small community as it comes to terms with shock and loss. Darina, Phoenix's grief-stricken girlfriend, is on the verge. She can't escape her intense heartache, or the impossible apparitions of those that are meant to be dead. And all the while the sound of beating wings echo inside her head...And then one day Phoenix appears to Darina. Ecstatic to be reunited, he tells her about the Beautiful Dead. Souls in limbo, they have been chosen to return to the world to set right a wrong linked to their deaths and bring about justice. Beautiful, superhuman and powerful, they are marked by a 'death mark' -- a small tattoo of angel's wings. Phoenix tells her that the sound of invisible wings beating are the millions of souls in limbo, desperate to return to earth. Darina's mission is clear: she must help Jonas, Summer, Arizona, and impossibly, her beloved Phoenix, right the wrong linked to their deaths to set them free from limbo so that they can finally rest in peace. Will love conquer death? And if it does, can Darina set it free?
------------------------------------------------------
I'm happy to say that Beautiful Dead surpassed my low expectations.

The plot is simple but not too simple. Not to mention original, which is always appreciated by me, especially in a paranormal romance. It had just the right amount of mystery, romance and paranormal happenings to make it rather addicting.

My favorite character was actually the main character, Darina. She was spunky and strong-willed and just a lot of fun. I also really like Phoenix. I actually liked all of the characters. (Well, except the one who I was supposed to hate. I hated him.) Phoenix and Darina's romance was very believable, sweet, and just very well-done.

The writing wasn't poetic or anything close to it, but it was well done and added to the story just the right amount. Eden Maguire is a great new voice in YA.

The ending wrapped things up really nicely and I'll definitely be reading book 2, Arizona. All in all, a very entertaining read that I'd recommend.