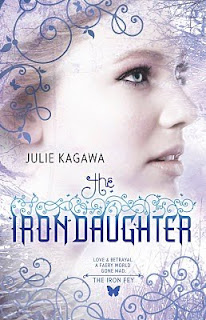 Synopsis includes spoilers for those who haven't read The Iron King

Pages: 359 (Paperback)
Publisher: Harlequin Teen
Most Appropriate For Ages: 12+
Where I Got It: Bought
Other titles in the series: The Iron King

Half Summer faery princess, half human, Meghan has never fit in anywhere.

Deserted by the Winter prince she thought loved her, she is prisoner to the Winter faery queen. As war looms between Summer and Winter, Meghan knows that the real danger comes from the Iron Fey, iron-bound faeries that only she and her absent prince have seen. But no one believes her. Worse, Meghan's own fey powers have been cut off.
She's alone in Faery with only her wits for help. Trusting anyone would be foolish. Trusting a seeming traitor could be deadly. But even as she grows a backbone of iron, Meghan can't help but hear the whispers of longing in her all-too-human heart.

It was just. so. AWESOME. I mean, I'd heard fantastic things about it, but...so. AWESOME.

Now that Ethan's safely back at home, you'd think that Meghan would have less drive. Well, she didn't. She's still as driven and strong as she was in The Iron King. But she's not some lifeless warrior woman. (Even if she wants to be at times.) She has feelings, and they're strong and conflicted. Conflicted between Puck and Ash....

What "team" am I on? Well, if you'd asked me anytime I was reading The Iron Daughter I'd firmly say "Puck! Totally! Ash is a heartless, rude, arrogant, boring, too serious, no-good, orphan-eating, toad-licking, evil, narcissistic, sadistic, lame, heartless...."

BUT THEN the ending came. And something that Ash does just sort of changed everything I'd thought of him like that. I still love Puck...but now I love them both.

And we meet new people and old people with new attitudes! I swear none of them are similar at all, and I seriously don't know how Julie Kagawa does it.

And while we're talking about Julie Kagawa, she's created such an amazing world with her vivid description and excellent storytelling. She just plain ROCKS.

Only with a truly great series is the sequel as good as the first book, and The Iron Daughter was just as good as The Iron King...if not better. Which means potential blow-your-mind amazingness for The Iron Queen, which I want to be out, um, NOW please.


Book Report:
Plot: Full of action and romance.
Characters: LOVE 'EM.
Writing: Gorgeous.
Ending: MORE!
Kid friendly? Well, there's a little swearing and gore as well as mentions of sex.
Should I read it? LIKE, NOW. As long as you've read The Iron King first.
Overall:

And be sure to stop by and check out my interview with Julie Kagawa tomorrow!