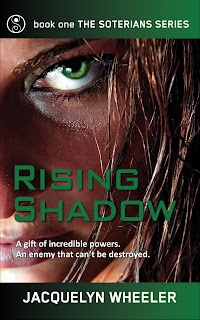 Ashlyn Woods just transferred to one of the most beautiful campuses on the west coast, where she can't wait to start her life over as a normal college student. But her plans take an unexpected turn when she discovers that she is a Soterian: a person who develops amazing powers when the balance of good and evil shifts too far in evil's favor.

Soon she and the other Soterians are studying martial arts and learning to use their powers to prevent California from being plunged into chaos. But they quickly discover that they're up against a much more dangerous enemy than they anticipated.

And when Ashlyn meets Kai, a devastatingly gorgeous guitar player, she realizes she must sacrifice more than she ever imagined.

I had my fair share of issues with Rising Shadow, but I ended up enjoying the story quite a bit.

The plot's been done by movies, TV, books, and comic books: group of people get powers and become superheroes. Luckily, it didn't feel like an overdone cliche, which it easily could have. Wheeler managed to make the Soterians' story a fresh, exciting, and fast-paced one.

My main issues with this book have to do with our main character, Ashlyn, and her love interest, Kai. Well, Ashlyn was so moody and dependent on Kai. She goes a while without seeing him and she gets completely can't-eat-I'm-gonna-die-of-sadness depressed, like he'd decided he hated her. It made her seem very weak.

And Kai? Well, Kai was, in every way, perfect. ...And I don't mean that as a good thing. The man had absolutely no flaws. It made him seem very unrealistic and I ended up disliking his character because of it.

Then, combine the two characters, and you end up getting this nauseating, overly-mushy couple. Yeah, we get it, you're their other half, you can't imagine life without them, you can't bear to be without them at any times to the point that you watch them use the toilet...we get it.

Those were the only two characters I didn't like, though. The side characters, while a little underdeveloped,  each had a unique, amusing personality that I was drawn to. Cristoph, Jesse, Rebecca, Candace, and Raina were my favorites.

Also, a warning: This is a very liberal book. I, personally, found this to be nice, but if you're extremely right-wing, I could see where this would bother you. (The villains in Rising Shadow? Politicians. I thought that was pretty awesome.)

Despite some serious character issues, Rising Shadow ended up winning me over in the end with it's action-packed plot and new take on heroes and villains. I'll be reading the sequel.

Kid friendly? There's mild swearing, and I'm like 80% percent sure there was sex, though it was so vague I just kind of assumed. XD

Should I read it? Sure.
Overall:

Look out for a guest post from Jacquelyn in a few days!