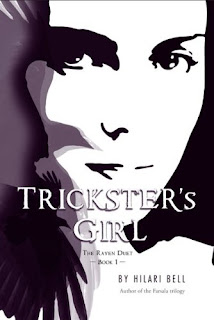 Author: Hilari Bell
Release Date: January 3, 2011
Pages: 289 (E-book)
Publisher: Houghton Mifflin Books for Children
Most Appropriate For Ages: 12+
Where I Got It: For review from Netgalley


In the year 2098 America isn't so different from the USA of today. But, in a post-9/11 security-obssessed world, "secured" doesn't just refer to borders between countries, it also refer to borders between states. Teenagers still think they know everything, but there is no cure for cancer, as Kelsa knows first-hand from watching her father die.
The night Kelsa buries her father, a boy appears. He claims magic is responsible for the health of Earth, but  human damage disrupts its flow. The planet is dying. Kelsa has the power to reverse the damage, but first she must accept that magic exists and see beyond her own pain in order to heal the planet.

Sadly, I felt kind of indifferent about Trickster's Girl.

It started out pretty strongly, and I liked the environmental message a lot. Sadly, though, I became bored a little more than halfway through and from there I just didn't really care that much anymore

But I didn't really not like it, either. As I said, I felt almost indifferent towards it. The characters were decent. That's it. Decent. I was intrigued by Raven, Kelsa's magical mentor, and I would've liked to get to know him better than we did. He could've been so much more than he was, I thought.

So, I guess those are pretty much my only thoughts. This review sounds kind of mean, but like I said, I didn't not like Trickster's Girl. I just I wish I'd enjoyed Trickster's Girl more, but instead it was just an average, OK read for me.

Writing: Decent enough.
Ending: Rather anti-climactic, I thought, but not bad.
Kid friendly? There are a few swears, but nothing too extreme. This one's pretty safe.
Should I read it? Yeah, sure, go for it.